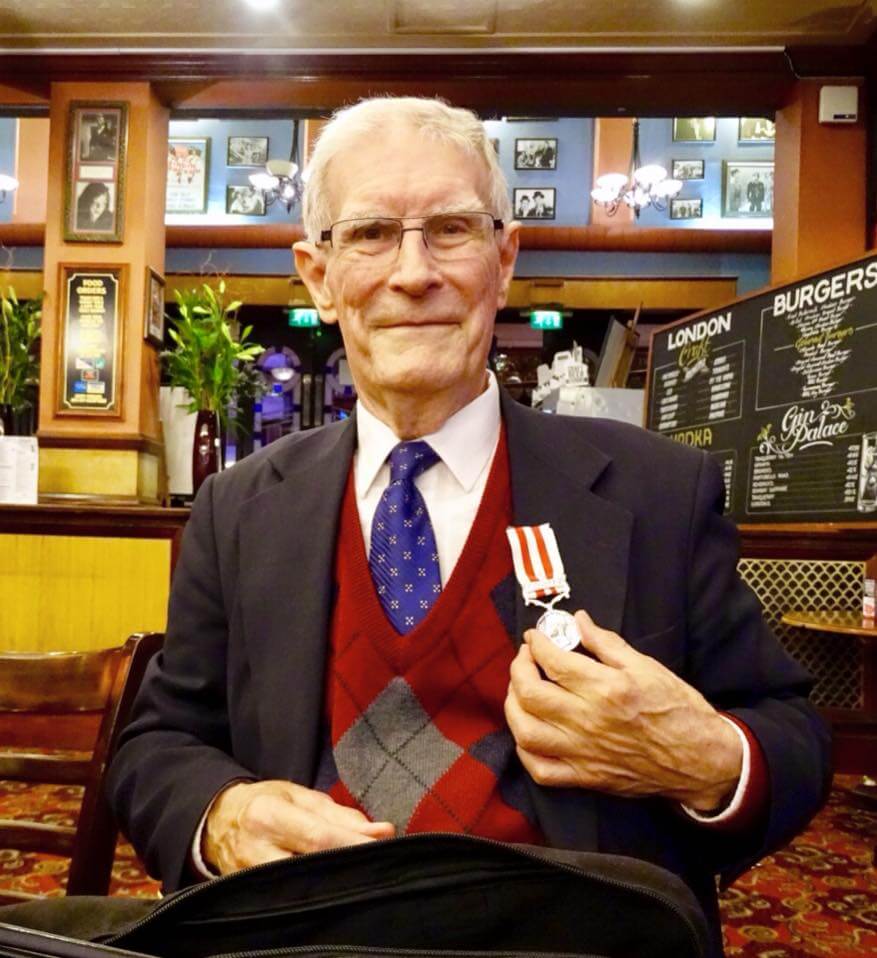 Peter with the Indian Mutiny Medal Geraldine Charles gave him as a retirement gift.

May I say a few words of THANK YOU to the team which has been so important in making FIBIS so successful. I have counted that we have had some 34 trustees over the last 18 years so, I hope that you will forgive me if I do not acknowledge all of them. I would have to take all night!

But, let me start by referring to Member No. 1 – Donald Jaques. Donald was our first Treasurer and really launched FIBIS with a loan of £50. I note that our accounts have now reached some £50,000. Not a bad return for the effort that so many have put in!

In fact, the Treasurership is the only role role that I have not fulfilled so I am particularly indebted to Donald, Elaine MacGregor, John Lawrence, Hugh Wilding and latterly John Napper who have all been so active in building FIBS over the 18 years of our existence.

Donald was also our first Research Officer, a function so capably later adopted by Lawrie Butler and now by Beverly Hallam and, of course her enthusiastic team of Xandra and Noel.

Our longest standing trustee (member No 4) is Geraldine Charles. She will remember that Donald and a few others, proposed to the Committee chaired by Tony Fuller, in the early days that we should not continue with FIBIS: it would not be necessary since all family history research will be undertaken on the internet. Maybe he was right in the long term, but happily not yet.  Geraldine & I resisted this and persuaded our colleagues to continue. We have had a great time over the next 18 years! I was the Membership Secretary at the time when our membership was not much more than 100. I am pleased to say that we are now reached over 1400 and are officially recognized by the FFHS as a large Society. Many thanks to subsequent Membership Secretaries, Lawrie Butler, Elaine MacGregor, Emma Sullivan, Suzanne Webber, Luci Martin and now Libby Rice for helping us to achieve this.

In about 2001, we instigated probably our major contribution to Family History – our now famous website. Anne Kelsall established our platform and we transferred to it some of the early datasets that we had previously put onto Cathy Day ‘s site. We copied other datasets in collaboration with BL and then we commissioned our expert trustee John Kendall to develop a new programme – FRONTIS – designed for use as a searchable on-line database. When Anne left us, we asked Valmay Young to join us and the whole thing took off. Valmay incorporated the FibiWiki, the Gallery and the Social Network to the Database and produced the world beating website that we have today, regularly winning the FFHS award for the best FH website. Thanks to Anne, John and especially to Valmay for this.

In parallel with this, we owe a tremendous amount to Robert Charnock for helping to fill our database. Robert ‘s prodigious – and I mean prodigious – efforts to transcribe data, together with those of David Edge and John Gannon, Steve van Dulken, Penny Tipper  and latterly, Nigel Penny  who led a small army of Transcribers have gone a long way to make up the two million or so rows of data that we currently have in our Database!

I would not like to forget the parts played by our Journal Editors, in particular David Blake, Sarah Bilton, Margaret Murray and latterly Emma Oram, for establishing and maintaining the very highest standards and quality of our Journals and to Lawrie Butler who has diligently proof-read every Journal apart from the first few. Also to Richard Morgan who has joined me in producing FIBIS Guides and Fact Files, which Richard, Elaine MacGregor, Steve van Dulken and John Lawrence have sold so well at our meetings and directly through a number of bookshops.

I would further not like to forget the various Secretary ‘s that have so dutifully reported to Company ‘s House and to the Charity Commission over the many years. Jenny Law, David Blake and latterly Xandra Sherman.

In parallel with all our progress in the UK, we also made great progress in other parts of the world, particularly in Australia. I would like reserve my special thanks to Mary Anne Gourley and especially to Sylvia Murphy. Sylvia very kindly arranged for Tricia and me to visit the Royal Australian Historical Society during a visit to Sydney where I addressed lots of our members there in 2004. Their efforts, plus those of Eleanor Neil in New Zealand, have played a very significant part in making us a truly international organization.

There is little doubt that we reached the peak of our activity in May 2014 at the time of our Conference in Meriden in the centre of England.  This demonstrated above all, the professionalism and the success of FIBIS as a team exhibiting these qualities to the rest of the World. I deeply thank Penny Tipper for the conception and basic organization of the event and to Elaine MacGregor who master-minded the detail and who caused this significant event to go ahead virtually without a hitch.

May I also express my thanks to our Publicity and Public Relations Officers who keep our Society at the forefront of peoples ‘ minds.  They have been Elaine MacGregor, Norman Meadows, Jane Baker, Hazel Schurch and latterly Joss O ‘Kelly. Our reputation had been growing steadily and now, it is rare that our activities are not reported in one of the major Family History magazines every month.

Finally, I would like to recall that very early in our history, we attended the Society of Genealogists Annual Family History Fair. This was held at the Royal Horticultural Society ‘s Halls in Westminster. I remember that we started in about 1999 with one small table covered with a fragile blue plastic cloth. Compare that with our attendance today 1at the WhoDoYouThinkYouAre? Live earlier this year, thanks to Pat Scully ‘s tremendous negotiating skills and his boundless energy, we took over a whole island of 10 tables with our small army of volunteers, all distinguishable in their famous red and gold T-shirts and solar topees  – which everyone now acknowledges as the leading amateur Family History Society at the show – apart from the Society of Genealogists itself. Ladies and Gentlemen, we were once considered be a society pandering to a marginal interest. Now, we are accepted as being a ‘large society – and one which is still growing despite the pressures from the Ancestrys and FindMyPasts of this World.  We pack a punch far above our weight. Let us keep it that way.

Now, at the venerable age of 80 years – and after 15 years as Chairman – I feel that it is appropriate for me to step down and hand over the reins to someone else who can provide new ideas and introduce new blood. I am so very pleased to say that Pat Scully has expressed a keenness in taking over the position.  I ask you to be kind enough to support him as enthusiastically as you have supported me. So in accepting this honour of becoming Life President that you have bestowed on me, I am confident that I can sit back a little and that Pat and the Fibis team will guide the Society- from strength to greater strength and maintain the us as “ The Jewel in the Crown of all Family History Societiesâ€ for long into the future.